Do all four hooves ever leave the ground at the same time? 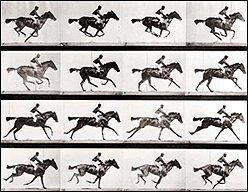 When a horse is running or trotting, do all four hooves ever leave the ground at the same time? That was the wager that the former Governor of California, Leland Stanford had with some of his friends. There was much controversy in horse racing circles at the time, and though most people believed that a horse always has one hoof in contact with the ground, Stanford thought otherwise. Because a horse’s legs are moving so fast, it’s impossible to tell just by looking, so he needed a way to slow down the movement so it could be studied. In 1872, Stanford offered Eadweard Muybridge, a world-famous photographer of landscapes $25,000 to find the answer. Muybridge wasn’t quite sure he could set up and perform an experiment to settle the dispute, but with that much money at stake he agreed to take on the challenge. He set up a row of cameras with tripwires, each of which would trigger a picture for a split second as the horse ran by. The results settled the debate once and for all: all four hooves do leave the ground at once. Not only did Standford win the bet, “motion pictures” were created. Long story short, we have a horse to thank for all the movies we enjoy watching today.